Most people seem to find museums a less enjoyable place to visit however in St Andrews there is a museum to keep every member of the family interested! 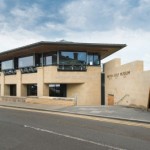 The British Golf Museum is located opposite the clubhouse of the Royal and Ancient Golf Club directly behind the world famous Old Course. The award winning Museum has entertained and informed thousands of visitors since opening its doors to the public in 1990. Delighting new and returning visitors year after year, the museum continually changes displays and ensures the highest levels of customer care.

It documents the history of golf from medieval times to the present, including the men’s and women’s games, British and international, both professional and amateur. Exhibits include historic equipment, memorabilia and art work, documentation, the history of the Royal and Ancient Golf Club, and the rules and terminology of the game. The museum is open to the public seven days a week throughout the year.

They are now one of only 9 museums in Scotland to be awarded 5 star status by Visit Scotland, having achieved the highest level under their Quality Assurance scheme for the ninth consecutive year. In 2011 the museum was shortlisted as a finalist for the Best Visitor Experience in Scotland, by the Association of Scottish Visitor Attractions.

The British Golf Museum has recently just re-opened to the public in time for the 144th Open Championship being played in St Andrews. Visitors will now be welcomed by a re-modelled reception, shop and entrance galleries and our spectacular 80 seat café on the roof. The early history and interactive galleries have been transformed to bring the spirit of the game alive for visitors. Their shop now sells Official Open Merchandise year round. The Café at the Museum offers local produce in a superb setting, with unrivaled views of the 1st tee of the famous Old Course. 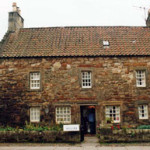 The St Andrews Preservation Trust Museum is a small, independent museum situated in a 17th century house in the heart of the town’s old fisher quarter, a stone’s throw from both the castle and the cathedral.

The museum contains a wealth of information and objects relating to the history of St Andrews and its people. Permanent displays feature old St Andrews shops. Great Granny’s Wash House is outside and you can also relax in the award-winning gardens.

The museum collections include fine art, costume, furniture and many other objects with local connections. There is also an important collection of some 10,000 photographs, postcards, slides and glass negatives. These can be viewed by arrangement with the curator and copies can be requested.

Recent temporary exhibitions have included the history of the harbour and the local fishing community, the Victorians, the 1950s and the development of St Andrews from settlement to city.

There are two cafés close to the Museum, and public toilets are a five minute walk away in Church Square. There are no parking facilities, toilets or café offered at the Museum itself.

The museum is open daily from 2pm to 5pm during exhibitions and by appointment with the curator at other times.

Museum of the University of St Andrews 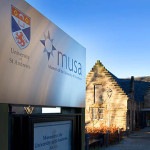 The museum is now closed for refurbishment and will re-open in the Spring of 2020.

The Museum of the University of St Andrews (MUSA) opened to the public in October 2008. The museum houses a selection of the University’s historic and artistic collections, which comprises of over 112,000 artefacts which are displayed across four galleries. The museum also contains a viewing terrace with panoramic views over St Andrews Bay.

The four galleries each aim to tell the story of the University of St Andrews from its beginning in 1410 until the present day. Each gallery takes a different theme. ‘Scotland’s First University’ covers the start and early period of the University’s history. ‘Living and Learning’ examines student life at St Andrews and looks at aspects such as dining, student societies and the iconic red gown. ‘Seeing and Believing’ investigates the big ideas that have emerged from students, staff and alumni in the areas of Science, Theology and the Arts and features figures such as astronomer James Gregory (mathematician), mathematician John Napier and theologian Samuel Rutherford. The fourth gallery is now used for temporary exhibitions and shows a range of changing displays. Recent exhibitions have included the history of graduation and a display of medieval University maces borrowed from ancient universities around Europe.

The museum considers its highlight to be three medieval ceremonial maces which date from the 15th century. The oldest of these, the Mace of the Faculty of Arts, was commissioned in 1416 and was most likely made in Paris. It has a simple hexagonal head on which are engraved the images of saints and the coats of arms of various important families from the time of the creation of the University of St Andrews. The second mace, that of the College of St Salvator, was made in Paris by Jean Maiel in 1461. It shows Christ, or St Salvator, in the centre of an architectural shrine. He stands on a globe with his hands raised to show the nail marks. Around him stand three angels, each holding a symbol of the passion. The third mace, that of the Faculty of Canon Law, was most likely made in Scotland in the mid-15th century and is thought to be a copy of the Mace of the Faculty of Arts, though the quality is not as good. Its probable origin in Scotland makes it particularly rare. These maces are still used during graduation ceremonies.

Some items give insights into student life, such as the black stone, on which students sat from the early 15th century to take their oral examinations. A stained glass window dedicated to Thomas Chalmers, the leader of the Disruption of the Church of Scotland, an early Gregorian Reflecting Telescope, made by James Short in 1734, and a mazer which is the earliest known fully hallmarked piece of Edinburgh silver are also of some importance.

The museum occasionally displays the only surviving one of the six bulls sent by Pope Benedict XIII to found the University of St Andrews in 1413. Owing to its age and consequent fragility, however, a facsimile is usually on display.

The museum runs a wide ranging programme of talks, workshops and tours on a variety of subjects related to its collections. The programme currently comprises around 200 events each year.

MUSA has been awarded five stars, the highest available rating, by Visit Scotland and was a runner-up for the Association of Scottish Visitor Attractions awards in 2012 and 2014. The museum has a score of four and a half out of five on Trip Advisor.

MUSA has been visited by a number of famous faces. His Royal Highness Prince William visited in 2011 with his then fiance Catherine Middleton as part of the celebrations for the University’s 600th anniversary. During the visit they examined the papal bull and were given a guided tour of the museum by Director Ian Carradice. Both Prince William and the Duchess of Cambridge are alumni of the University.

The museum was opened in 2008 by crime writer Ian Rankin, who had the opportunity to see rarely displayed life masks of Edinburgh grave robbers Burke and Hare.

The museum has featured on the BBC2 series Celebrity Antiques Roadtrip, when news reader Alastair Stewart visited, and has welcomed Elaine C. Smith for a recent documentary.

The museum has an audio guide that is narrated by actress Joanna Lumley, although Lumley has not visited the museum in person.

The museum is open: 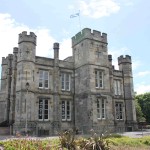 St Andrews Museum is located in Kinburn Park, a short walk west of North Street. Built as a private residence in 1855 and named after a Crimean battle of the same year, Kinburn Castle became the home of St Andrews Museum in 1991. It is owned and operated by Fife Council.

The Museum explores St Andrews’ heritage from early times to the 20th century, covering both the medieval period when the Cathedral was one of the great religious centres of Europe and the growth of tourism starting in the Victorian era. In the Arrival Gallery, imaginative displays combine with interesting artefacts to tell the town’s story through the ages. The Kaleidoscope Gallery features a changing programme of temporary exhibitions on a wide variety of topics. The Activity Centre hosts lectures and activities for children throughout the year. The Museum café serves light meals, teas, coffees and home baking. 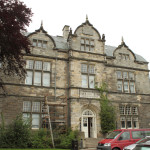 The University’s first Natural History museum was shared with the town’s Literary and Philosophical Society and dates from 1838. In 1904 the collections were taken over by the University Court, and in 1912 moved to their present site in the School of Biology Bute Medical Building, accessed from St Mary’s College (South Street).The new museum was financed by Mrs Bell Pettigrew in memory of her late husband. University staff research has added to the collections since then.

As Sir David Attenborough said: “Packed full of treasures and wonders, the Bell Pettigrew is a spectacular reminder of how important a museum can be in the study of the natural sciences.”

Today the museum is used by undergraduate students, visiting school parties, as a venue for School of Biology receptions and is on open to the general public on Tuesday and Friday afternoons in the summer vacation – early June until mid-September. The museum is also open on a Saturday as part of National Science Week in the spring, and on a Sunday in September as part of Doors Open. Visits at other times are welcomed by arrangement with the Hon. Curator, Dr Martin Milner. 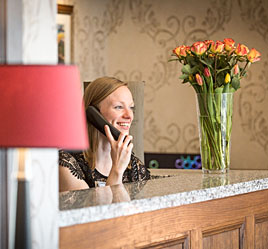